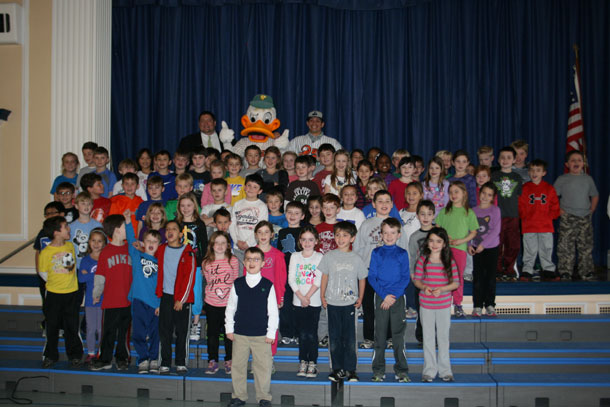 
(Rockville Centre, N.Y., Jan. 10, 2012) –
On Tuesday, the Long Island Ducks spent the morning with Daniel Dunlap and all of his classmates at Jennie E. Hewitt Elementary School in Rockville Centre. Daniel was the third of four winners in TD Bank’s annual “Take a Duck to Class” Essay Contest, and as part of his prize, he received an assembly for all of the second graders with the “Best Mascot on Long Island,” QuackerJack, and the “Best Long Island Duck,” Ray Navarrete.

The assembly began at 11:00 when Daniel’s principal congratulated him for submitting a winning essay and then had Daniel read his winning essay aloud to the entire class. Next, TD Bank vice president and Rockville Centre store manager Ryan Koutsogiannis presented Daniel with a $25 Visa gift card for his great essay. QuackerJack was then introduced to a thunderous ovation before Ray spoke to all of the children about the importance of community, believing in yourself, and never giving up on your dreams. The party then moved back to Daniel’s classroom, where each student was given a gift bag full of goodies, courtesy of TD Bank, and treated to a special autograph session with QuackerJack and Ray. A host of media was also in attendance to talk with the lucky winner and his classmates and capture all of the excitement. CLICK HERE to check out a video by News 12 about the event

Contestants in TD Bank’s “Take a Duck to Class” were able to pick up applications from local TD Bank locations and submit an essay on “Why my community is important to me.” Out of hundreds of essays received from all over Long Island, four winners were selected.  Each winner receives a visit from a Ducks player and Long Island’s most popular mascot, QuackerJack, along with a Visa gift card from TD Bank. Each student in the winner’s class receives a gift bag, courtesy of TD Bank.


The final “Take a Duck to Class” appearance of the season will be held on Tuesday, January 17 when the Ducks head to Paul E. Kirdahy Elementary at Captree in West Islip. QuackerJack and Ray will be on hand to congratulate Michelle Holub for submitting a winning essay. The ceremonies will begin at 9:45 a.m., and it is sure to be another exciting day.