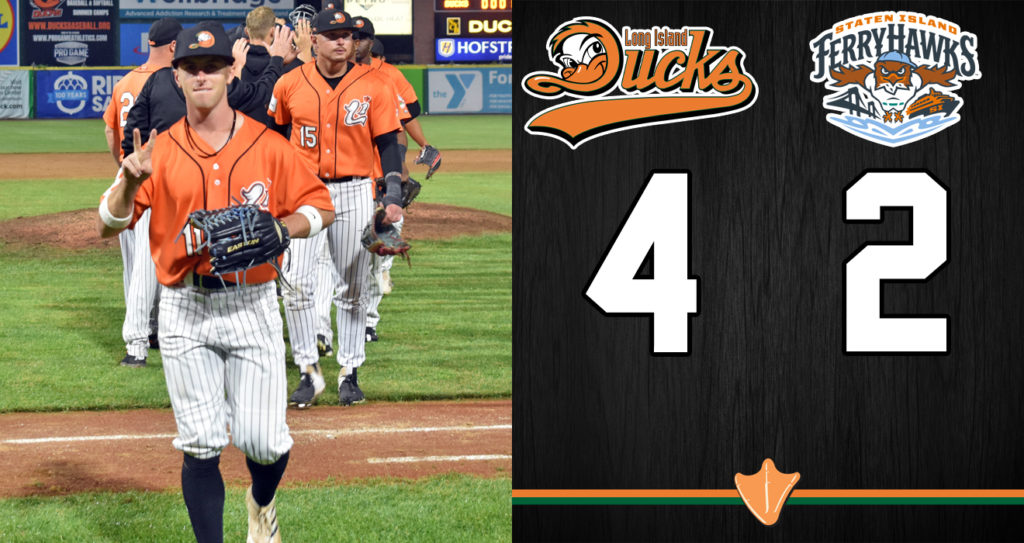 Both teams exchanged zeroes until the top of the fifth inning when Antoine Duplantis’ RBI single to left field off Ducks starter Ryan Meisinger gave the FerryHawks a 1-0 lead. Andres Noriega’s RBI double to right in the sixth doubled the lead to two.

Long Island closed to within 2-1 in the bottom of the sixth on Jose Sermo’s RBI single to left off FerryHawks starter Augie Sylk. A three-run eighth then gave the Ducks a 4-2 lead. Tzu-Wei Lin’s RBI single through the right side tied the game, and Phil Caulfield’s two-run double down the right field line put the Flock in front.

Neither starter factored into the decision. Sylk tossed five and one-third innings of one-run ball, allowing five hits and four walks while striking out five. Meisinger surrendered a run on nine hits and a walk over five innings with three strikeouts. Wladimir Pinto (1-0) picked up the win with a scoreless eighth inning, striking out two. Victor Capellan (5-3) suffered the loss, yielding three runs on three hits and two walks in one inning. Tyler Webb collected his 12th save with a scoreless ninth, striking out the side.

The Ducks and FerryHawks wrap up their three-game set on Thursday night. Game time is slated for 6:35 p.m., with the Fairfield Properties Ballpark gates opening at 5:35 (5:20 for full season ticket holders). The first 1,500 fans in attendance will receive 2022 Ducks Team Photos, courtesy of Farmingdale Meat Market. It’s also a Thirsty Thursday at the ballpark! Throughout the game, fans will be able to enjoy a special buy one, get one half-price offer on all Brooklyn Brewery products. In addition, the Duck Club restaurant/bar on the club level will be open for all fans to enjoy. Left-hander Stephen Tarpley (4-6, 3.90) toes the rubber for the Ducks against FerryHawks righty Matt Solter (4-8, 3.64).