TICKETS FLY OUT OF BOX OFFICE FOR 2013 SEASON 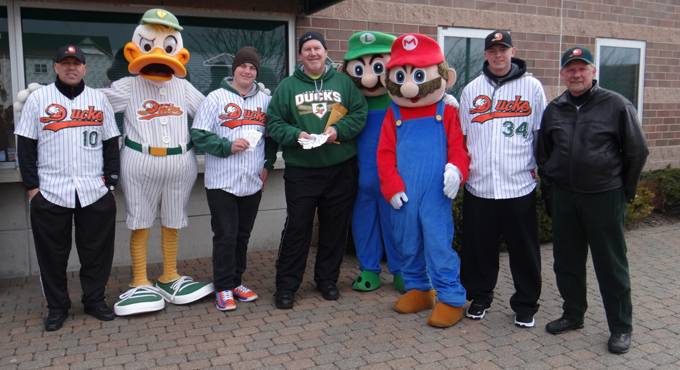 (Central Islip, N.Y., Mar. 16, 2013) – It was another exciting spring day at Bethpage Ballpark on Saturday as hundreds of Ducks fans came out to celebrate the annual Opening Day of Ticket Sales. Overall, thousands of tickets were purchased by the “Faithful Flock” eagerly awaiting the start of the team’s 14th season on Long Island.

Despite the tremendous turnout at the box office, plenty of great tickets for 2013 Ducks games are still available. Fans can purchase individual game tickets NOW by calling (631) 940-TIXX or by CLICKING HERE. The Ducks have once again kept ticket prices the same for this season, offering the most affordable family entertainment on Long Island. Prices range from $11.00 (box seats) to $12.00 (field box seats) per seat. Fans wishing to enjoy the VIP experience at discounted prices can become season ticket or mini-plan holders by contacting the ticket sales department at (631) 940-3825, extensions 115 or 116.

Those standing in line on Saturday morning were treated to a carnival-like atmosphere at Bethpage Ballpark, emceed by The Wiseman and Frank from B-103. Send in the Clowns Entertainment and Bethpage Federal Credit Union provided fun games, prizes and giveaways for all those in attendance. Complimentary refreshments were also available for fans courtesy of Centerplate, Bethpage, Hebrew National, North Fork Chips and Tropical Smoothie Café. Ducks’ mascot, QuackerJack, was on hand for pictures and autographs along with members of the 2013 Ducks, including co-owner/coach Bud Harrelson, manager Kevin Baez, infielder Ray Navarrete and pitcher Pete Budkevics. Guest stars Mario and Luigi also joined in the fun, courtesy of Play-N-Trade.

The first fans in line, Ryan and Charlie Kamer, were awarded with a brand new Playstation 3, courtesy of P.C. Richard and Son, along with a $500 gift card courtesy of Bethpage Federal Credit Union. Additionally, the Kamers were joined by the “first kid in line,” 11-year-old Patrick, and the “youngest first fan in line,” five-year-old Aaron. Both received a gift bag full of Ducks apparel for their dedication to Long Island’s hometown team.