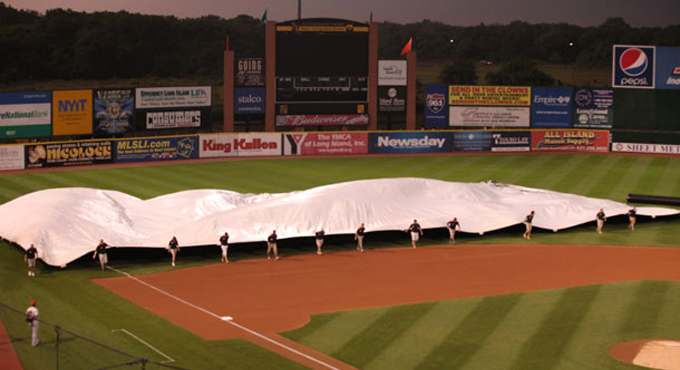 (Central Islip, N.Y., Sept. 4, 2012) – Tuesday’s (September 4) game between the Long Island Ducks and Somerset Patriots has been postponed due to inclement weather.

Tuesday’s (9/4) game will be made up as part of a single admission doubleheader on Wednesday, September 5, with both games slated for seven innings. Game time for the opener is scheduled for 6:35 p.m., with the Bethpage Ballpark gates opening at 5:35. Game two will begin approximately 30 minutes following the completion of the opener. Tickets for Tuesday’s (9/4) game will be good for Wednesday’s (9/5) doubleheader only.

To commemorate the night, the Ducks will be wearing special pink jerseys and pink hats, with players also using pink bats during the game. The game-worn jerseys and game-used bats are currently being auctioned off, and fans can place their bids during Wednesday’s game at the auction tables located outside the Waddle In Shop. Bids can also be placed by calling the store at (631) 940-DUCK, extension 126. The auction ends at the seventh inning stretch, or at the completion of Wednesday’s game one, whichever occurs first, so be sure to get your bids in early.

All proceeds from the auction will benefit the Breast Cancer Awareness organizations that will be in attendance on Wednesday night. Bids began at $75 and will be increased in minimum $10 increments. Fans can track the current highest bids below.

Tickets for the doubleheader and all Ducks home games are available by visiting the Bethpage Ballpark box office, calling 631-940-TIXX or visiting www.liducks.com. Fans unable to make the twinbill can follow all the action for both games live online at LIDucks.com by clicking the Watch Live icon on the homepage. Streaming video and audio will be presented by iBN, the Internet Broadcast Network.

Wednesday’s Team Photo giveaway has now been rescheduled for Wednesday, September 12 when the Ducks take on the Lancaster Barnstormers. The first 2,500 fans in attendance on September 12 will take home a 2012 Team Photo, courtesy of The QuackerJack Foundation. First pitch is scheduled for 6:35 p.m., with the Bethpage Ballpark gates opening at 5:35.