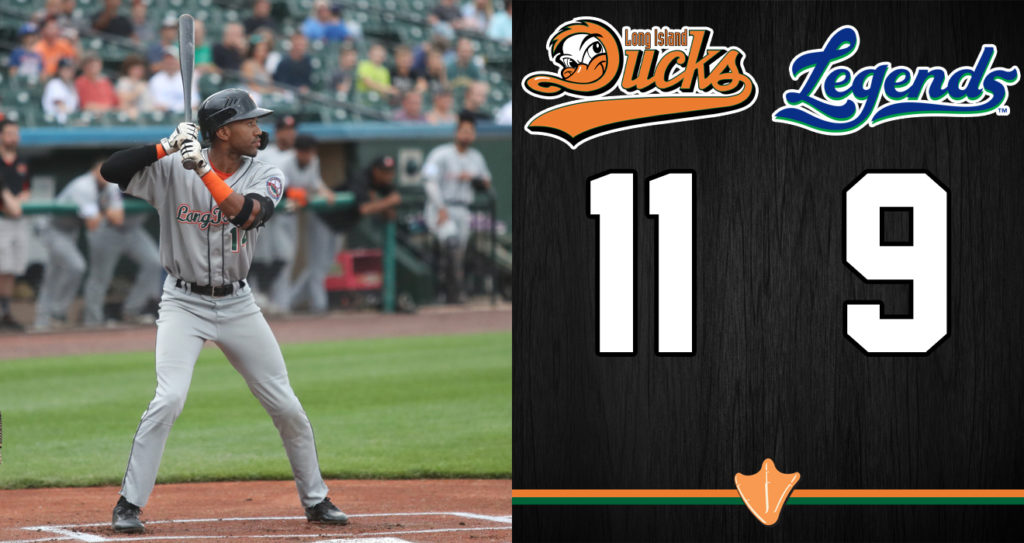 (Lexington, Ky., April 29, 2022) – The Long Island Ducks defeated the Lexington Legends 11-9 on Friday night in the opener of a three-game series at Wild Health Field.

Johnni Turbo put the Ducks in front immediately, leading off the game with a solo home run to left field off Legends starter Tom Dorminy. A throwing error that scored Deibinson Romero and a sacrifice fly by Deven Marrero that plated Sam Travis extended the Ducks lead to 3-0 in the second.

Lexington closed to within 3-2 in the bottom of the second on Dom Bethancourt’s RBI double and Cesar Cuevas’ run-scoring groundout off Ducks starter Scott Harkin. The Ducks restored their three-run advantage in the fourth on a double play ball that scored Sam Travis and Turbo’s RBI single to center. However, Montrell Marshall’s RBI double and Boog Powell’s two-run double in the bottom of the frame tied the game at five.

Joe DeCarlo put the Ducks back in front with a sac fly to right in the sixth. A five-run seventh, highlighted by RBI singles from Rusney Castillo and L.J. Mazzilli along with a three-run homer to left by Romero, extended Long Island’s advantage to 11-5. The Legends closed to within two in the eighth on a wild pitch that scored Courtney Hawkins and a three-run double by Cuevas. However, they could not pull even.

Harkin (1-0) picked up the win, tossing five innings, allowing five runs on seven hits and three walks with one strikeout. Jalen Miller (0-1) took the loss, giving up six runs on six hits in one inning. Sandy Baez earned his first save of the season with a scoreless ninth, working around two hits while striking out one.

The Ducks and Legends continue their three-game set on Saturday night. First pitch is scheduled for 6:35 p.m. at Wild Health Field. Fans can follow all the action on the Long Island Ducks Broadcast Network. Live streaming HD video and audio will be available via BoxCast on LIDucks.com as well as on the Ducks official Facebook page and YouTube channel. Right-hander Hunter Caudelle (1-0, 4.50) takes the mound for the Ducks against Legends righty Jeff Thompson (0-1, 9.00).