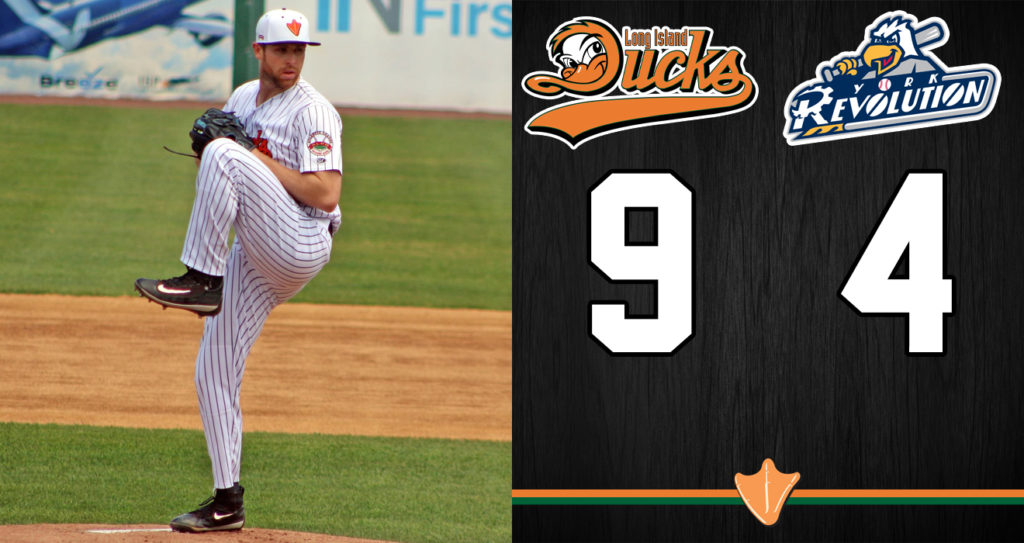 Both sides traded zeroes until the bottom of the fourth inning when Daniel Fields hit an opposite-field three-run home run off Revolution starter Jorge Martinez. The Revolution tied the game at three in the fifth inning on a run-scoring error and a two-run single by Troy Stokes Jr.

Long Island took the lead back in the sixth when Dustin Woodcock scored from third on a throwing error by Carlos Rivero. However, a two-out solo homer to left by Stokes Jr. in the seventh tied the game once again at four.

The Ducks took the lead back for good in the seventh when Vladimir Frias raced home from third on a wild pitch. Four more runs in the eighth put the game out of reach. Deven Marrero’s sac fly to right, Joe DeCarlo’s RBI double, Rusney Castillo’s RBI single and a bases loaded walk to Sam Travis did the damage.

Neither starter factored into the decision. Scott Harkin threw four scoreless innings for the Ducks, allowing just two hits while striking out four. Martinez lasted four innings, yielding three runs (two earned) on four hits with six strikeouts. Hunter Caudelle (1-0) picked up the win, allowing a run on two hits and a walk with three strikeouts in two innings of relief. Johsson Arias (0-1) took the loss, conceding the go-ahead run on two hits in one inning. Tyler Webb collected his first save of the season, striking out three and giving up three hits in one and one-third innings.

The Ducks kick off a nine-game road trip on Tuesday night when they open a three-game series against the Charleston Dirty Birds. First pitch is scheduled for 6:35 p.m. at Appalachian Power Park. Fans can follow all the action on the Long Island Ducks Broadcast Network. Live streaming HD video and audio will be available via BoxCast on LIDucks.com as well as on the Ducks official Facebook page and YouTube channel. Right-hander Akeel Morris gets the start for the Ducks against a Dirty Birds starter to be determined.