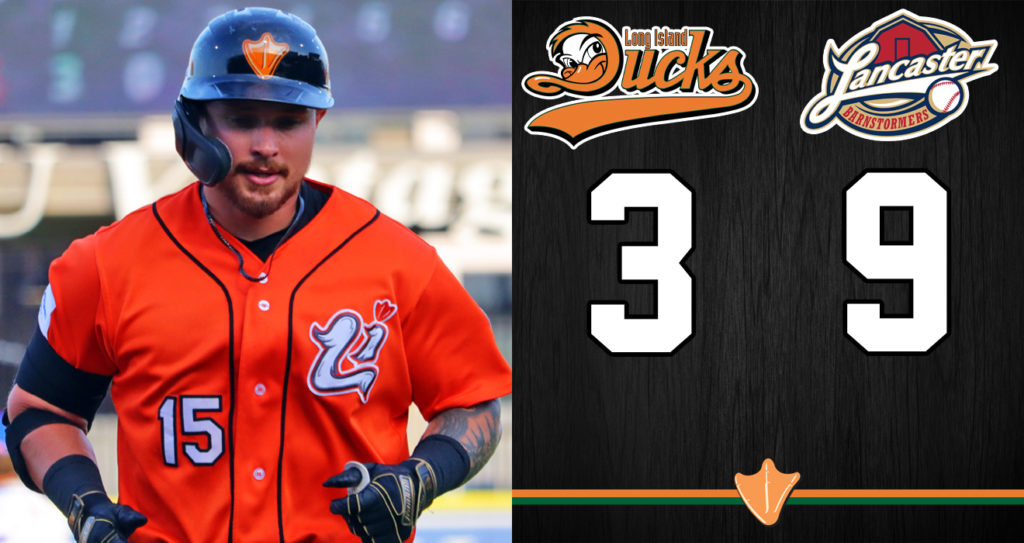 (Lancaster, Pa., Aug. 23, 2022) – The Long Island Ducks were defeated by the Lancaster Barnstormers 9-3 on Tuesday night in the opener of a three-game series at Clipper Magazine Stadium.

The Ducks opened the scoring in the third when Tzu-Wei Lin came home on a double play ball to give the Ducks a 1-0 lead. The Barnstormers then went in front 4-1 against Ducks starter Ryan Meisinger in the bottom of the third on a two-run home run to right field by Melvin Mercedes, an RBI fielder’s choice off the bat of Jacob Barfield and a throwing error.

A balk by Barnstormers starter Nile Ball in the fourth scored Deibinson Romero to make it a 4-2 game. However, a wild pitch that plated Jake Hoover and a two-run double by Andretty Cordero pushed Lancaster’s lead to 7-2.

Jose Sermo’s sacrifice fly to center in the sixth closed the gap to four, but the Barnstormers plated two runs on a two-run double by Barfield in the bottom of the inning to stretch their lead to six.

The Ducks and Barnstormers continue their three-game set on Wednesday night. First pitch is scheduled for 6:30 p.m. at Clipper Magazine Stadium. Fans can follow all the action on the Long Island Ducks Broadcast Network. Live streaming HD video and audio will be available via BoxCast on LIDucks.com as well as on the Ducks official Facebook page and YouTube channel. Left-hander Stephen Tarpley (4-7, 4.55) takes the mound for the Ducks against Barnstormers righty Cameron Gann (6-8, 5.62).