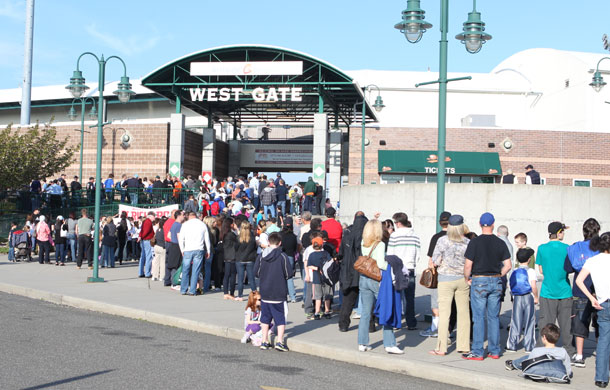 Opportunity for fans to exchange tickets from missed games


(Central Islip, N.Y., May 29, 2012)
– The Long Island Ducks announced that Tuesday, June 5, Wednesday, June 6 and Thursday, June 7 will be “Unused Ticket Days” at Bethpage Ballpark. Fans that did not make it out to a ballgame during the 2012 season and are still in possession of unused tickets may exchange them for tickets of equal or lesser value at the Bethpage Ballpark Box Office, subject to availability.

“We want to make sure each and every fan has the opportunity to experience the fun and excitement of Ducks baseball,” says Ducks President and General Manager Michael Pfaff. “We understand that the first month of the season was a mixed bag with regards to the weather, and some people may have stayed home on nights they had tickets for a Ducks game. We have a big series at Bethpage Ballpark against the cross-sound rival Bridgeport Bluefish June 5-7 and hope to see fans take advantage of this opportunity.”

Ticket holders interested in trading in their unused tickets can do so by visiting the Bethpage Ballpark Box Office. Tickets can be exchanged for games on June 5, June 6 and June 7 against the Bluefish. All three games are scheduled to begin at 6:35 PM, with ballpark gates opening at 5:35. A one dollar fee per ticket will be applied to account for the Suffolk County surcharge on all tickets.

The exchanging of tickets must be done at the Bethpage Ballpark Box Office, and cannot be done over the phone or via the Internet.  For more information, please contact the ticket office at (631) 940-TIXX.