WADDLE IN SHOP OPEN FOR THE HOLIDAYS! 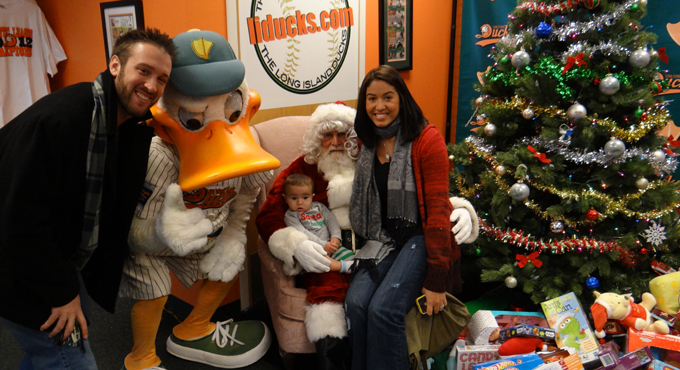 Game-worn jerseys from the Championship season available for purchase

(Central Islip, N.Y., Dec. 1, 2012) – The Atlantic League champion Long Island Ducks announced that the Waddle In Shop, the team’s official merchandise store, is now open for the holiday season! The shop will remain open through Thursday, Dec. 20 with hours on Mondays, Wednesdays and Fridays from noon to 6:00 p.m. and Saturdays from 10:00 a.m. to 2:00 p.m.

Fans can now browse a wide range of official Ducks merchandise, including authentic game-worn jerseys from the Ducks’ 2012 Championship season. Brand new apparel including t-shirts, sweatshirts and polos to commemorate the Ducks’ Atlantic League title, are also available. There’s something for each and every Ducks fan, so be sure to stop by and enjoy the fun!

In conjunction with the opening, the Ducks are collecting new, unwrapped toys at Bethpage Ballpark between now and Dec. 17 during store hours for those spending the holidays in the hospital. The toys will be delivered by members of the Ducks’ Street Team, powered by National Grid, to the pediatric units at Stony Brook University Medical Center, Good Samaritan Hospital Medical Center and North Shore LIJ/Southside Hospital. Pediatric patients range from newborn to 24 years of age. Hospitals have made the following suggestions for gifts based on the age of patients:

If fans cannot make it during Waddle In Shop hours, the Ducks will also be accepting donations at the Bethpage Ballpark executive offices Monday through Friday from 9:00 a.m. to 5:00 p.m.

The Long Island Ducks are members of the Atlantic League of Professional Baseball and play their home games at Bethpage Ballpark in Central Islip, N.Y. For further information, call (631) 940-DUCK or visit www.liducks.com.