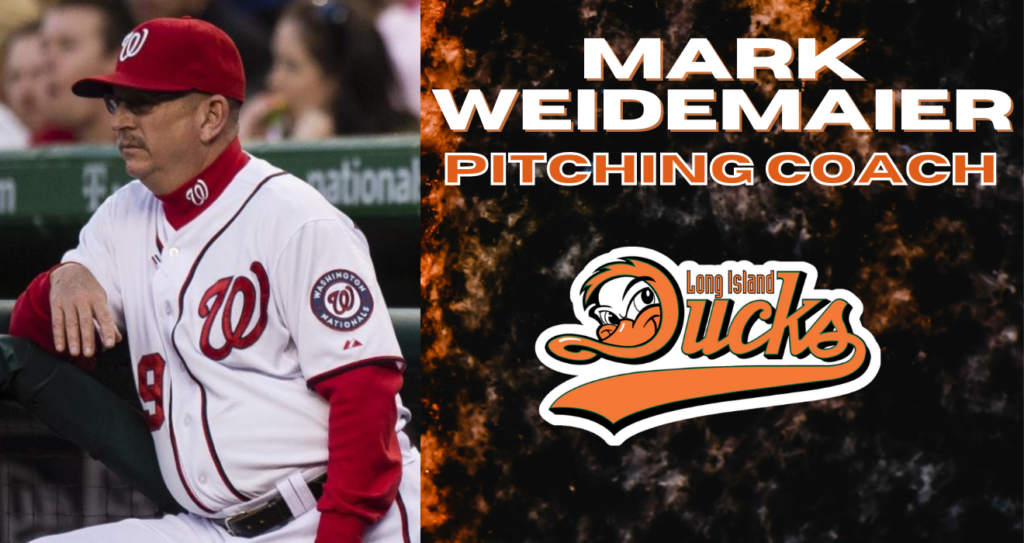 (Central Islip, N.Y., June 3, 2022) – The Long Island Ducks today announced the hiring of Mark Weidemaier as pitching coach. He takes the place of Rick Tomlin, who has resigned the position in order to spend more time with his family.

“We would like to thank Rick for his time here and welcome Mark to our coaching staff,” said Ducks President/GM Michael Pfaff. “We look forward to his expert tutelage assisting our pitching staff.”

Weidemaier joins the Ducks after serving as the manager of the Tecolotes de los Dos Laredos in the Mexican League to begin the 2022 season. The 67-year-old has previously served on the Major League coaching staff of the Washington Nationals from 2014-15 as the team’s defensive positioning coach. He spent the 2020 and 2021 seasons as the bench coach for the Kia Tigers in the Korean Baseball Organization. Weidemaier served two seasons in a dual role as a scouting coordinator and assistant coach with the Samsung Lions in Korea from 2016-17 and also spent two seasons as field manager for the Rojos del Aguila de Veracruz in Mexico from 2015-16.

Additionally, the Ducks announced the signings of right-hander pitcher Ryan Meisinger and infielder Rob Weissheier. Both players begin their first season with the Ducks and in the Atlantic League. Meisinger is a three-year Major League veteran, having pitched with the Baltimore Orioles (2018), St. Louis Cardinals (2020 and Chicago Cubs (2021). Weissheier is a Long Island native from Valley Stream who played his collegiate baseball at Hofstra University in Uniondale, N.Y., and pitched in 2021 and 2022 with the Windy City ThunderBolts of the Frontier League. In corresponding roster moves, the Ducks placed infielder Nick Bottari on the disabled list retroactive to June 2 and released infielder Jaylen Smith.