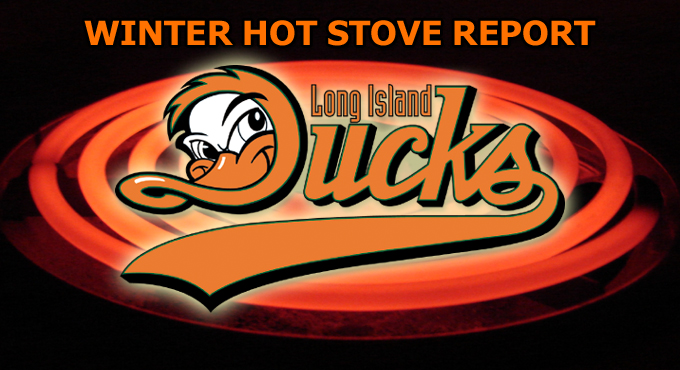 (Central Islip, N.Y., Jan. 18, 2013) – Despite the 2012 Atlantic League season coming to a close, many members of the Long Island Ducks’ championship team are still playing baseball and making headlines. Some players have been signed by Major League organizations, while others are continuing their dream by playing in countries such as the Dominican Republic, Mexico and Venezuela.

Three Ducks have played this winter in the Dominican Republic. Pitcher Randy Keisler was a member of Leones del Escogido and posted a 3.86 ERA in five starts. The left-hander went 5-3 with a 2.63 ERA in the 2012 regular season before posting a 2.13 ERA in two postseason starts with the Ducks in ‘12. Pitcher Matt Way and outfielder Timo Perez were teammates with Tigres del Licey this winter. Way, who was signed by the Arizona Diamondbacks earlier this offseason, had a 9.00 ERA in two starts, while Perez totaled a homer and three RBI in 19 games. Way pitched 14 and one-third innings of scoreless ball for the Ducks in the regular season and compiled a 2-0 record with a 2.87 ERA in four postseason games (two starts). Perez hit .292 with three homers and 14 RBI during the regular season with the Flock and was 3-for-6 with two RBI in the playoffs.

Down in Mexico, three Ducks from the 2012 championship squad all spent time as teammates with Mayos de Navojoa. Outfielder Kraig Binick hit .328 with 25 RBI, 45 runs, 14 doubles and 19 stolen bases in 67 games, while outfielder Matt Esquivel hit six home runs and drove in 12 runs over 33 games. Pitcher Leo Rosales earned nine saves in 18 games with the club. Binick had a tremendous postseason with the Ducks in 2012, batting .405 with four RBI and five runs scored, while Esquivel hit .269 during the regular season and .263 in the playoffs. Rosales threw three scoreless innings after joining the Ducks late in the season before tying a franchise record with three saves in the postseason.

In Venezuela, pitchers Jon Meloan, Jon Hunton and Nick DeBarr played together with Caribes de Anzoategui. Meloan picked up seven saves while posting a 1.31 ERA in 19 games, while Hunton had eight saves and a 2.70 ERA in 14 contests and DeBarr threw one and one-third scoreless innings. Meloan earned seven saves while posting a miniscule 0.98 ERA in 23 games with the Ducks before being signed by the Yankees organization. Hunton collected eight saves in 22 games with the Flock in 2012, while DeBarr threw three scoreless innings during the regular season and pitched in two postseason games. Left-hander Gustavo Chacin also pitched in Venezuela this year with Navegantes del Magallanes and went 4-4 with a 3.80 ERA in 14 starts. He also went 2-1 with a 0.95 ERA in three playoff starts.

Stay tuned for more updates on what members of the 2012 Ducks are doing during the offseason. To find out more news and notes from the Caribbean winter leagues, please CLICK HERE.