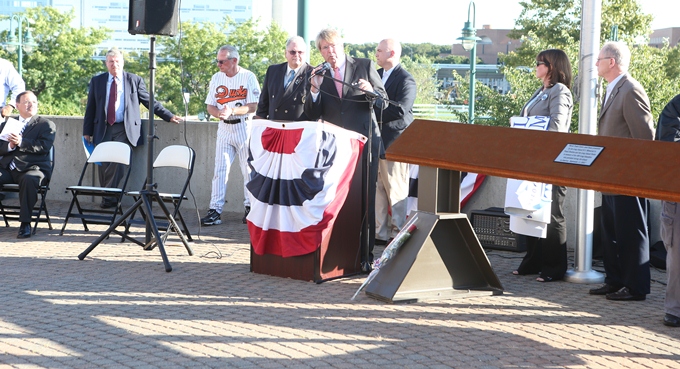 (Central Islip, N.Y., Sept. 11, 2012)
– On Tuesday evening, Retired New York City Fire Officer and Long Island 9/11 Memorial President Ken Dolan dedicated a steel beam from the World Trade Center to Frank Boulton and the Long Island Ducks in recognition of their long-time support and friendship of the organization. The steel beam (pictured above), given to Dolan from the WTC site in 2001, will be permanently affixed to the grounds outside Bethpage Ballpark in memory of the 490 Long Islanders that lost their lives in the attack on America.

The steel will be accompanied by a plaque with the name of each victim from Long Island to serve as a permanent tribute in remembrance. Each season going forward, the hundreds of thousands of Long Islanders that flock to the park will have the opportunity to visit this piece of steel on the ballpark plaza in front of the flag poles.