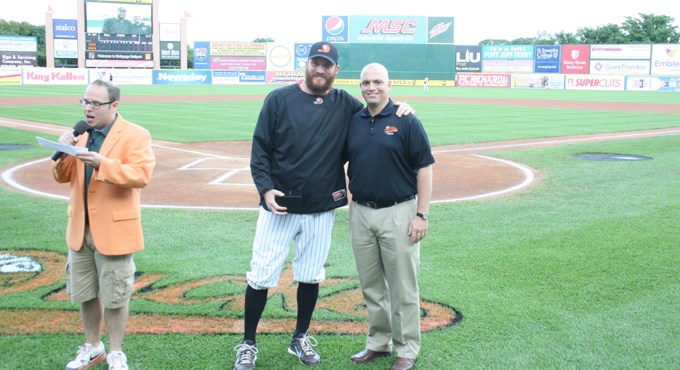 
(Central Islip, N.Y., Sept. 16, 2012) – On Fan Appreciation Day Sunday, the Long Island Ducks announced that Bob Zimmermann has been named the 2012 Ducks/Delmonte-Smelson Most Valuable Player. The right hander was chosen via fan voting on the Ducks’ official Facebook page,
www.facebook.com/liducks, out of four nominees for the award.

“Bob’s been an important part of our starting rotation all season long,” says Ducks president/general manager Michael Pfaff. “He has a tremendous work ethic, and has developed a strong connection with our fans during his two seasons on Long Island.”

Zimmermann leads the Ducks pitching staff in innings pitched (172.0) and strikeouts (117) in 2012. Those totals currently rank him fourth and third respectively in all of the Atlantic League. The St. Louis native also struck out at least one batter in all but one of his 27 appearances (26 starts). He beat out teammates Ray Navarrete, Brandon Sing and Dan Lyons in the fan vote.

In his last start on September 14 against Camden, he picked up a season-high nine strikeouts en route to a victory in the Ducks’ 8-5 win over the Riversharks. Zimmermann was especially strong in the friendly confines of Bethpage Ballpark, where he went 6-5 with a 3.67 ERA and 71 strikeouts in 15 games (14 starts). The righty was also superb in the month of June, posting a 3.38 ERA and 29 punchouts in 37 and one-third innings, helping lead the Flock to the 2012 First Half Liberty Division title.

The Long Island Ducks are members of the Atlantic League of Professional Baseball and play their home games at Bethpage Ballpark. For further information call (631) 940-DUCK or visit www.liducks.com.