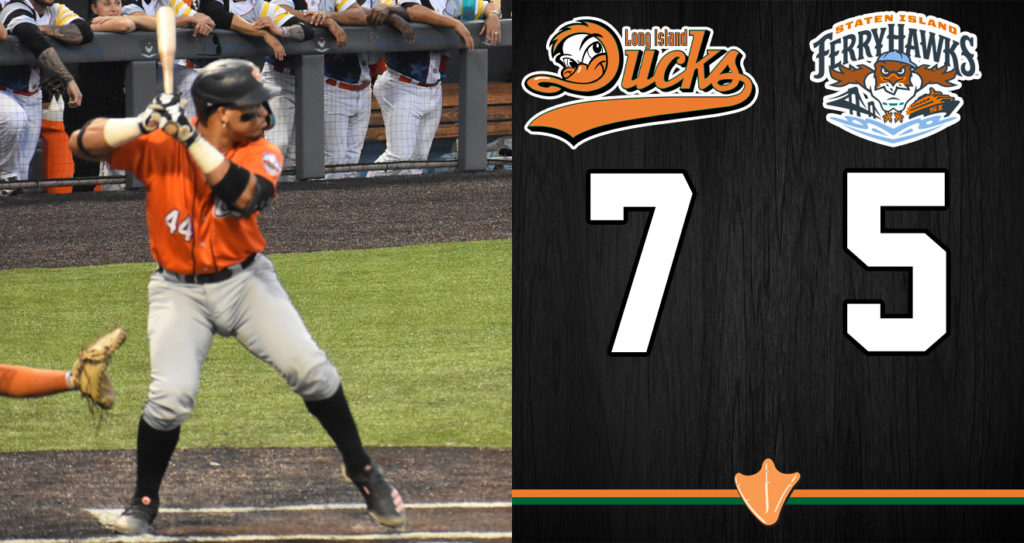 (Staten Island, N.Y., Sept. 18, 2022) – The Long Island Ducks defeated the Staten Island FerryHawks 7-5 on Sunday afternoon in the rubber game of a three-game series and the final game of the 2022 season at Staten Island University Hospital Community Park.

Staten Island struck first, courtesy of an RBI single by Mariel Bautista in the first inning off Ducks starter Joe Iorio. The Ducks answered with a four-spot off FerryHawks starter Anthony Rodriguez in the second to take a 4-1 lead. Jose Sermo’s RBI double, Joe DeCarlo’s RBI single, an error that scored Dustin Woodcock and a wild pitch that plated DeCarlo highlighted the inning.

Neither starter factored into the decision. Iorio tossed five innings, allowing three runs (one earned) on eight hits while striking out three. Rodriguez also pitched five innings, conceding four runs on seven hits and three walks with three strikeouts. Chas Cywin (1-1) picked up the win after tossing a scoreless eighth inning, striking out one. Nelson Figueroa (0-2) took the loss, surrendering two runs on two hits in one inning. Jose Jose collected his third save with a 1-2-3 ninth inning.

The Ducks would like to thank their tremendous fans for a successful 2022 season, both on and off the field. CLICK HERE to read about the many accomplishments the team achieved this year. 2023 Ducks season ticket plans and sponsorships are now available. For season ticket or sponsorship information, or to learn how you can get involved with the Ducks, please call (631) 940-3825 or visit LIDucks.com.